"Words mean more than what is set down on paper. It takes the human voice to infuse them with deeper meaning." 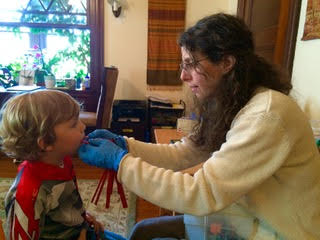 Do you or your child have a speech disorder that makes it difficult for others to understand what you are trying to communicate?

There are many reasons for decreased speech intelligibility. Here are a few examples of disorders and specialized techniques that are used to improve verbal expression and speech clarity. Success with speech is possible!

A specific motor speech disorder in which the child has difficulty planning the precise, highly refined and specific series of movements of the tongue, lips, jaw and palate that are necessary for intelligible speech. Apraxia of speech is sometimes called verbal Apraxia or developmental apraxia of speech. Individuals know what they want to say, but their brains have difficulty coordinating the muscle movements necessary to say the words. Learn more by visiting www.Apraxiakids.com.

The therapy I provide consists of an integrated approach including use of Positional Restructuring of Oral Motor Phonetic Targets (PROMPT). This approach allows the clinician to provide orofacial tactile and kinesthetic feedback and involves manipulating the oral structures through movements in order to enhance the child’s oral-sensory-perception of speech.

Brain/body exercises and meaningful linguistic targets are also used. Together, these techniques have been successful in helping children gain the ability to communicate verbally, improve speech so that others can understand them, and decrease frustration and behavioral issues related to not being understood.

Unlike CAS, Apraxia can be acquired from neurological injury including stroke and brain injury. Treatment techniques utilized include Integrated Structural Therapy and PROMPT therapy as described above. These modalities are helpful in treating children and adults who have had injury leading to this difficulty in planning, coordinating and executing speech.

A motor speech disorder resulting from neurological injury and involving paralysis, weakness, or inability to coordinate the muscles of the mouth, face, and/or respiratory system. Symptoms may include: “slurred” speech, slow rate of speech, drooling, etc. Dysarthria can occur as a developmental disability. It may be caused by neurological injury such as a stroke, or a sign of a neuromuscular disorder such as cerebral palsy or Parkinson disease.

Neruodevelopmental principals, oral motor based techniques, and use of optimal positioning and whole body relationships are incorporated into therapy sessions. Therapy consists of Integrated structural therapy to facilitate improved mobility and coordination of motor movements (for respiration, phonation and articulation) followed by exercises and functional speech opportunities using PROMPT. Benefits of these techniques include the ability to functionally communicate verbally and reduce or eliminate drooling.

The ability to move our articulators (jaw, lips, tongue) with appropriate accuracy is what leads to clear speech. It is also necessary to produce differentiated movements (for example, the jaw is stabilized while the lips and tongue move independently from each other and from the jaw).

Articulation therapy consists of exercises and various cues to help the child correct their movement patterns and sound productions. These cues may be verbal (e.g. tell the child where to place his tongue), visual (having the child look at the therapist’s mouth or in a mirror), tactile (i.e. touch; e.g. having the child slide their finger down their arm when making the [s] sound or tactile/ kinesthetic/proprioceptive such as with PROMPT. Success is measured by age appropriate articulation skills and clear pronunciation.